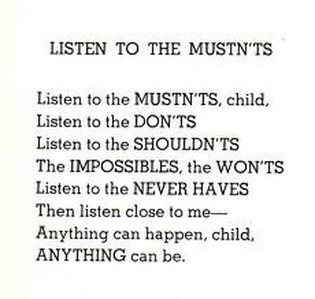 His poems were challenged because they undermine parental authority.
Where the Sidewalk Ends is one of the most challenged children's book because many parents view it as rebellious. The poems are said to undermine parental authority, and encourage the views of the occult. In 1986 the book was banned from West Allis Milwaukee school libraries because of drug reference, suicide, death, and a disrespect for truth and authority. Central Columbia School District in Bloomsburg, Pennsylvania also banned the book. Specifically for the poem, "Dreadful", a funny poem about how someone ate the baby. The concern was that lines like "Someone ate the baby" would encourage young students to participate in cannibalism. It has also been challenged by Xenia, Ohio school district and Minot, North Dakota public school system because the book supposedly undermines school and religious authority. 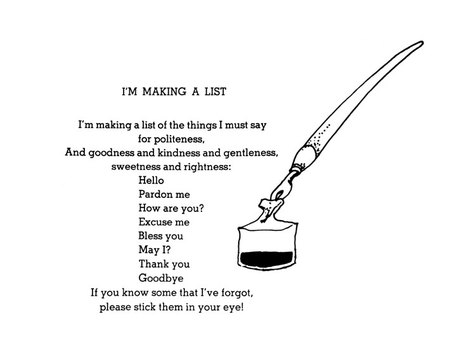 Parents don't like this poem because it encourages children to be rude.
Part of the big problem with his books is the fact that they encourage kids to not follow the rules and to instead use their imagination. The poetry is meant to be humorous and funny. However, he does often include some very realistic things that parents often don't want to expose their children to yet. But to children, they're not going to read a poem and assume that Silverstein is referencing drug use, they're going to think that funny man in the story is seeing things. Where the Sidewalk Ends has sold millions of copies worldwide, and children love the stories because they're funny. It also does give children a realistic point of view of the world, which is good for them to have. But, there are poems that give a optimistic view of the future. 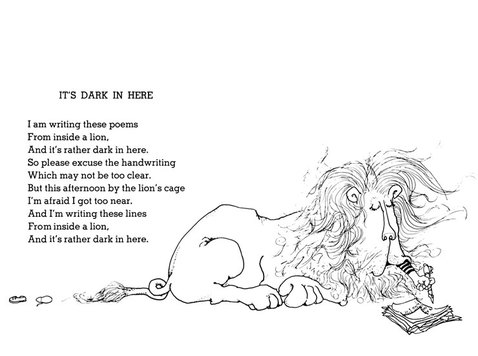 One of the humorous poems in Where the Sidewalk Ends
Banning books can really hurt children and cause them not to become the well-rounded readers that we encourage them to become today. When reading a book, a child doesn't have the same experiences that an adult has to apply as they're reading. They don't know what racism or cannibalism is, and they won't know unless they are told. So really, banning books isn't protecting them from much of anything. Instead, it's stopping them from reading very good books and stories.
Powered by